November 15, 2008
Creating and deleting files and folders on a hard disk is a constant process practiced by most of us. This leads to fragmentation of data and ultimately the performance of the computer starts to deteriorate. One of the easiest ways to make your PC run faster is to defragment your hard disk. Windows have built-in defragging tool for this, but only have limited features.

UltraDefrag is an open source, small (225Kb) disk defragmenter for Windows NT 4.0 and later operating systems and have some unique features. It makes use of the same defragmenting API used by many other windows defrag utilities, both open and closed source. 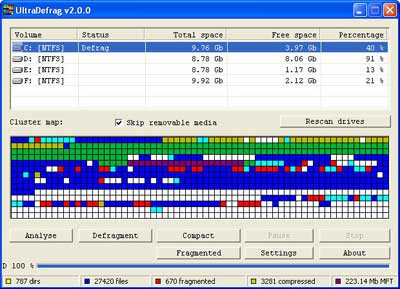 However, UltraDefrag has two features that make it unique. The first is that it has a kernel mode driver that does most of the work. The second is the ability to run the application at boot up time in a manner similar to chkdsk. This allows for faster defragmentation time and the ability to defragment all files including system files.
UltraDefrag supports the following filesystems FAT12/16/32, NTFS and on Vista UDF. UDF is a file system intended for optical media such as DVDs that unlike ISO9660, is rewriteable.

It has also the ability to defragment volumes at boot time allowing you to move many system files that are always locked by the operating system. Currently all files besides the registry hives and the pagefile can be scanned at boot time.
UltraDefrag can also defragment files and folders compressed by NTFS file system compression. And can even defragment floppies, although doing so is not particularly useful.

UltraDefrag binaries are available for the 32 bit and all 64 bit versions of Windows. However the defragging speed is not that much expected, but better than Windows.