December 29, 2008
Standard way to launch a website quickly and easily is bookmaking it in your browser. But if you have large number of sites in your book mark list, it’s become tedious to find one from this list. Here is a super-fast method for opening websites you use often throughout the day - just with a hot key and keyboard. You can add as many sites as you want - what sites to include is entirely up to you.

SiteLauncher is an add-on for Firefox that gives you a super-quick way to open your favorite websites using only your keyboard. One special hotkey brings up the Launcher followed by a unique key to launch a site. 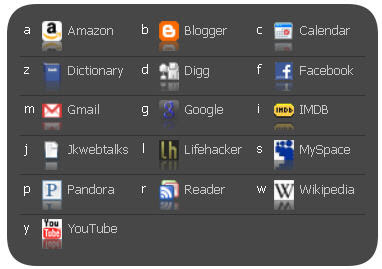 Compared to the alternative methods (bookmarks, the address bar, etc) the Launcher is the fastest, and most convenient way to navigate to often needed sites. SiteLauncher also minimizes clutter, because the Launcher only appears when you press the hotkey.

After installing the add-on, press the launcher hot key in Firefox (default key – for Windows: Ctrl + Space and for Mac: Ctrl + Alt) to instantly bring forward the Launcher. The launcher panel will present you with a list of your sites along with their associated keyboard keys. You can add your own site URL and hot keys (a-z, 0-9) from the Site launcher option menu.

Hit one of these keys to be transported to that site, for instance to open Gmail just press ‘g’ key on you keyboard, or hit Escape to cancel the Launch.. If you’re already memories the keyboard key associated with a given site you can launch that site immediately with the simple keyboard combination Direct to site hot key + Key (default site hot key for Windows: Shift + Alt and for Mac: Shift + Ctrl).Main features: Supports all versions of Firefox 2 and 3 to date. Install Site Launcher (via)