No doubt a backup tool is an important component of a computer system to get the system up and running in the event of a system crash or hardware failure. There are several reasons for a system crash like virus attack, unstable software downloads, hard drive failure, etc.

EASEUS Todo Backup is well-built, free, user-friendly backup software that lets you backup (into an image file) and restore your entire operating system (cloning), or any hard disk partitions (FAT 16/32/NTFS) to protect your system and disk.

You can backup to USB removable disk, Firewire disk as well as to CD/ DVD. However, EASEUS Todo Backup does not have an automatic backup system 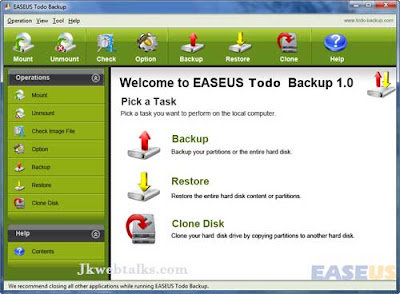 A backup tool not only useful in the event of system crash but also equally useful when you want to replace the older smaller hard disk by a newer larger hard disk without reinstalling the operating system and applications once again.

- Backup your partitions or entire hard drive into an image archive to retain their state.
- Restore from the image archive to its previous archived state.
- Clone a hard disk to replace the old one or transfer to another one.
- Create a bootable CD/DVD with Media Builder

EASEUS Todo Backup undoubtedly an easy to use software. The simple and detailed help file available with the program helps every one (even without having IT knowledge) to backup their entire system and important data.