Outlook Attachment Enabler is a freeware tool for controlling attachments received via Outlook 2010, 2007, 2003 and Office XP.

There are no easy ways to unblock these blocked attachments. Outlook Attachment Enabler allows you to block and unblock any extension you received with email. 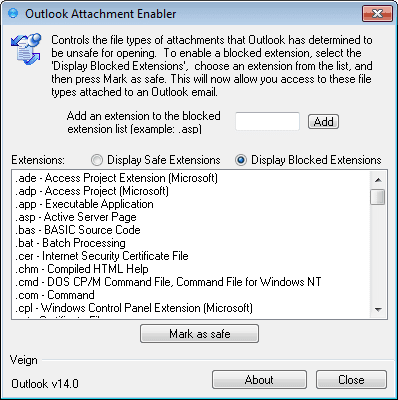 The software is compatible with Microsoft Outlook 2010, 2007, 2003 & Office XP and has the following features.

1. Control what attachments Outlook has deemed to be unsafe, 2. Add to the default list of blocked attachment types. 3. Includes the full and complete list of what Outlook will block by default. Download Outlook Attachment Enabler [Via – Blogsdna]