June 15, 2010
Digital Lens is a new tool from Microsoft which helps developers and designers to make their program UI accessible to users with impaired vision also. With this tool designers can view the visual design as it would be seen by vision impaired users.

“Vision problems affect most of the population during their lives. Digital Lens was designed with the mission to simplify the process of finding problems that would make your UI less accessible to users with impaired vision”. 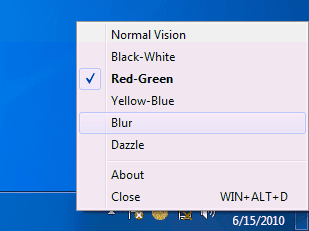 “It provides UI designers and developers the tools to view the visual design as it would be seen by vision impaired users”.

“By emulating common impaired vision conditions, Digital Lens users are able to identify issues in the UI and fix them before the product is released - with Digital Lens you are able to design a more accessible product”.

Digital Lens is a technology preview program and it support Windows 7, 32 bit only (with Aero Theme enabled). Download available at Microsoft download center. [Via]