February 03, 2011
There are several fake antivirus programs circulating over the internet these days. Fake antivirus is a class of malware or virus, which pretends or disguises itself to be a real antivirus program and pose security threats to the user. For example, see the details of recently discovered fake AVG Antivirus 2011, which looks similar to the real AVG Antivirus software. For an average user it is very difficult to identify the real AVG. 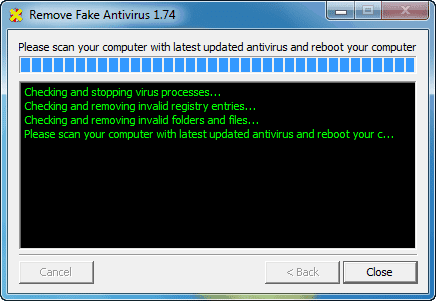 Remove Fake Antivirus is a standalone application that helps you remove several popular fake antiviruses, which are viruses or Trojan, including the latest fake AVG Antivirus 2011 from your computer.

Just run the tool, it’ll scan your computer and removes rogue programs. After finishing the scan, run a full system scan with a good antivirus program.