August 15, 2012
In Windows 8, one can close a running Metro style app (aka Modern UI apps) by dragging the app from the top edge of the screen to the bottom end or by using Alt + F4 hotkeys. If you’re using mouse movement or touch "swipes" to close a running metro app, here is how to improve that with a tiny application called “Close Threshold for Metro Apps”.

Close Threshold for Metro Apps lets you close a Modern UI app (metro app) with a much smaller mouse movement or touch swipe. Depending on your settings, you don’t need to drag the app to the bottom end of the screen to close an app. 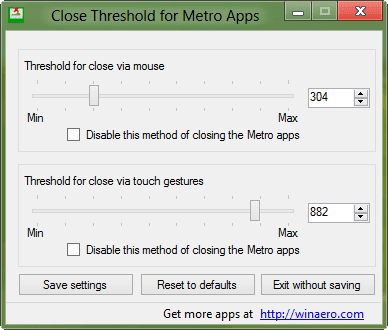 The app is also lets you disable Metro apps closing with mouse or with touch. Also, all changes can be set to default by clicking “Reset to Default” button.

Close Threshold for Metro Apps can be downloaded from developer’s website here.