October 22, 2012
One of the new features of Windows 8 is its Metro Boot Menu, which is completely different from the previous ones. However, if yours is a multi-boot system, say Windows 7 and Windows 8, there is an annoyance with this new Metro boot. If you select an OS other than Windows 8, it will boot only after a restart. Here is how to solve this dual reboot with a simple tool NanWick Windows 8 Switch Boot.


NanWick Windows 8 Switch Boot helps you to switch between Metro Boot Menu and Windows7 style boot menu. Comparing to the new Metro Boot Menu, the old one is fast and simple. 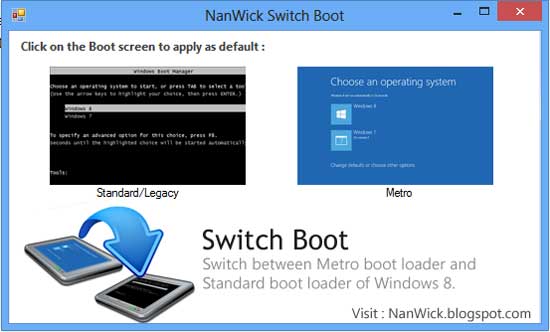 With this tool, you can easily switch between standard boot menu and Metro boot menu. After running the tool, just select a boot loader (Standard or Metro).

Note: Of course you can solve the dual restart annoyance of Metro boot menu on a dual boot system by selecting the other OS (for example, Windows 7) as the default OS from the boot menu of your system.

NanWick Windows 8 Switch Boot can be downloaded from source here.