How to Backup and Restore Windows 8 Games Levels and Settings

January 17, 2013
With Windows 8, you can install several apps and games from Windows Store. If you are serious about some of your games, you might not like to lose your game progress, levels and settings when you re-installing the game or re-installing Windows 8. As these Windows 8 games and apps differ from traditional desktop programs, it isn't an easy task to back up such data.


But the free tool “Windows 8 Apps Data Backup” makes everything simple. It lets users backup the data from any Windows 8 app they like and later lets them restore the data when they reinstalling the app or Windows.

Windows 8 Apps Data Backup is a portable tool. To back up the app data, close all running apps, then just run the tool, and select the apps or games that you want to back up data and click Backup button. Note that this tool only back up the data, not the app itself. 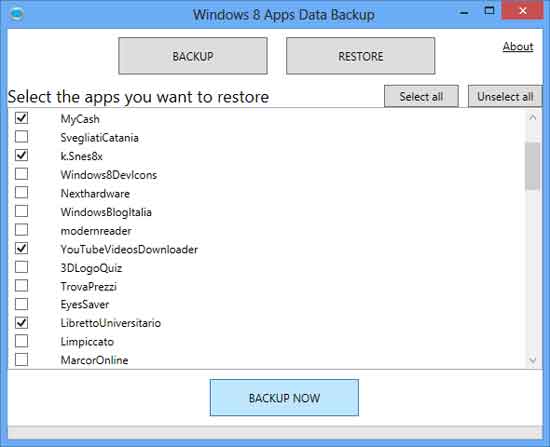 To restore the data, after installing the apps and games, run this tool and click on “Restore” option and then select the location of backed up data.