What is New in Windows 8.1 (Windows Blue)

April 20, 2013
Although Microsoft only released Windows 8 last October, if the many leaks and rumors are correct, it will update the OS to Windows 8.1 (code-named Windows Blue) with in few months. These leaks suggests that the improved Windows 8 will largely look the same, but Microsoft appears to be tweaking the start screen, updating core apps and introducing Internet Explorer11. It is expected that the first public preview of Windows Blue will be available in this June. 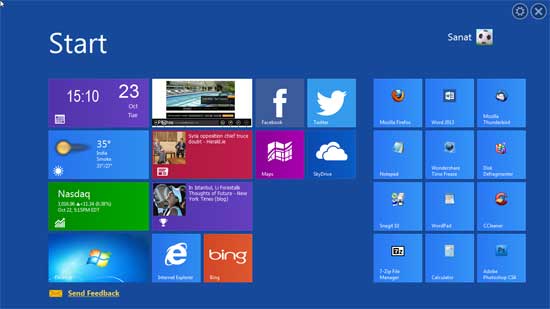 Following are some of the new features that Windows 8.1 (build 9369) will brings to its user.

- It features a Files App that lets you see your file system as well as your SkyDrive storage.

- You can now see your Apps sorted by the most used, the date it was installed, and by the name of the app.

- Another great feature is, you can now search for something while keeping the Start Screen open, which is a much-needed feature.

- Snap view has also been updated to make it easier for you to choose where you want to Snap the app to.

- Other features includes a new option to connect to a wireless display, new touchpad options in PC Settings, more Ease of Access settings, and a 'Save Files to SkyDrive by default' setting.

Note: Windows Blue is still in active development so things can always change as the build numbers progress. Check out a few of Windows 8.1 (build 9369) new features in this video.