July 09, 2010
Modern browsers have the ability to block web forgeries (also known as phishing pages) and malware attacked web sites. Usually these two settings are enabled by default on your browser.

However, if somebody has changed the settings or these two features are not working properly in your Firefox, here is how to test them.

To test web forgery (phishing), just enter at http://www.mozilla.com/firefox/its-a-trap.html. You should get a warning message as shown below.

And to test Malware attacked site, just enter at http://www.mozilla.com/firefox/its-an-attack.html. You should get a warning message as shown below.

If your Firefox not detecting anything just check whether above two settings (Block Reported Attack site and Block Reported Web Forgeries) are enabled by going to Tools – Option – Security [see screenshot below]. 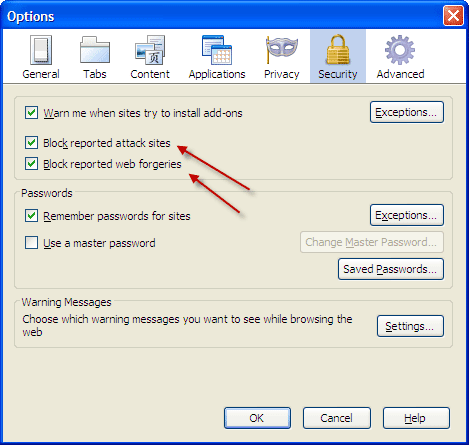 OK, what are web forgeries or phishing? It is a process of attempting to acquire sensitive information such as usernames, passwords and credit card details by hiding as a trustworthy entity in an electronic communication. Firefox 2 and above have ability to block phishing sites.

You can also make yourself safe from web forgeries by:

And what is Attack Sites (malware or badware site)? These sites can attack your computer without you even realizing it. These attacks can steal your personal information, damage your computer or use your system to attack others. Firefox 3 and later have ability to identify such sites.

You can help make yourself safer from Attack Sites by:

Hope these information helpful to you. (via Firefox)